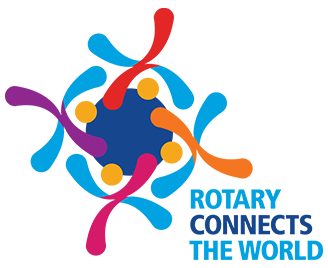 The world’s first service club, the Rotary Club of Chicago, Illinois, USA, was formed on 23 February 1905 by Paul P. Harris, an attorney who wished to recapture in a professional club the same friendly spirit he had felt in the small towns of his youth. The name “Rotary” derived from the early practice of rotating meetings among members’ offices.

Rotary’s popularity spread throughout the United States in the decade that followed; clubs were chartered from San Francisco to New York. By 1921, Rotary clubs had been formed on six continents, and the organization adopted the name Rotary International a year later.

As Rotary grew, its mission expanded beyond serving the professional and social interests of club members. Rotarians began pooling their resources and contributing their talents to help serve communities in need. The organization’s dedication to this ideal is best expressed in its principal motto: Service Above Self. Rotary also later embraced a code of ethics, called The 4-Way Test, that has been translated into hundreds of languages.

During and after World War II, Rotarians became increasingly involved in promoting international understanding. A Rotary conference held in London in 1942 planted the seeds for the development of the United Nations Educational, Scientific, and Cultural Organization (UNESCO), and numerous Rotarians have served as consultants to the United Nations.

An endowment fund, set up by Rotarians in 1979 “for doing good in the world,” became a not-for-profit corporation known as The Rotary Foundation in 1928. Upon the death of Paul Harris in 1947, an outpouring of Rotarian donations made in his honor, totalling US$2 million, launched the Foundation’s first program – graduate fellowships, now called Ambassadorial Scholarships. Today, contributions to The Rotary Foundation total more than US$80 million annually and support a wide range of humanitarian grants and educational programs that enable Rotarians to bring hope and promote international understanding throughout the world.

In 1985, Rotary made a historic commitment to immunize all of the world’s children against polio. Working in partnership with nongovernmental organizations and national governments thorough its PolioPlus program, Rotary is the largest private-sector contributor to the global polio eradication campaign. Rotarians have mobilized hundreds of thousands of PolioPlus volunteers and have immunized more than one billion children worldwide. By the 2005 target date for certification of a polio-free world, Rotary will have contributed half a billion dollars to the cause.

As it approached the dawn of the 21st century, Rotary worked to meet the changing needs of society, expanding its service effort to address such processing issues as environmental degradation, illiteracy, world hunger, and children at risk. The organization admitted women for the first time (worldwide) in 1989 and claims more than 90,000 women in its ranks today. Following the collapse of the Berlin Wall and the dissolution of the Soviet Union, Rotary clubs were formed or re-established throughout Central and Eastern Europe. Today, 1.2 million Rotarians belong to some 30,000 Rotary clubs in more than 160 countries.