Initial discussion began after a brilliant performance of the SMK Sains Wind Orchestra at our 26th Installation Dinner. President Elect Dr.Willie Lau  and Secretary Major Francis Ng were given the task to build up the club from scratch.

With overwhelming suport from the school, potential leaders had been identified. Then an intensive training has been conducted. Once ready a small launch ceremony has been held on 3rd Nov, 2011.

The Chartered Members and the Board of Directors were formally  introduced to President, President Elect , Vice President, and Secretary of Rotary Club of Kuching Central as well as to the school leadership. This was followed by an official registration  of The Interact Club of SM Sains Kuching on 11 Nov, 2011. (11.11.11) 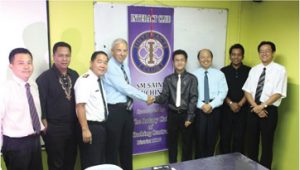